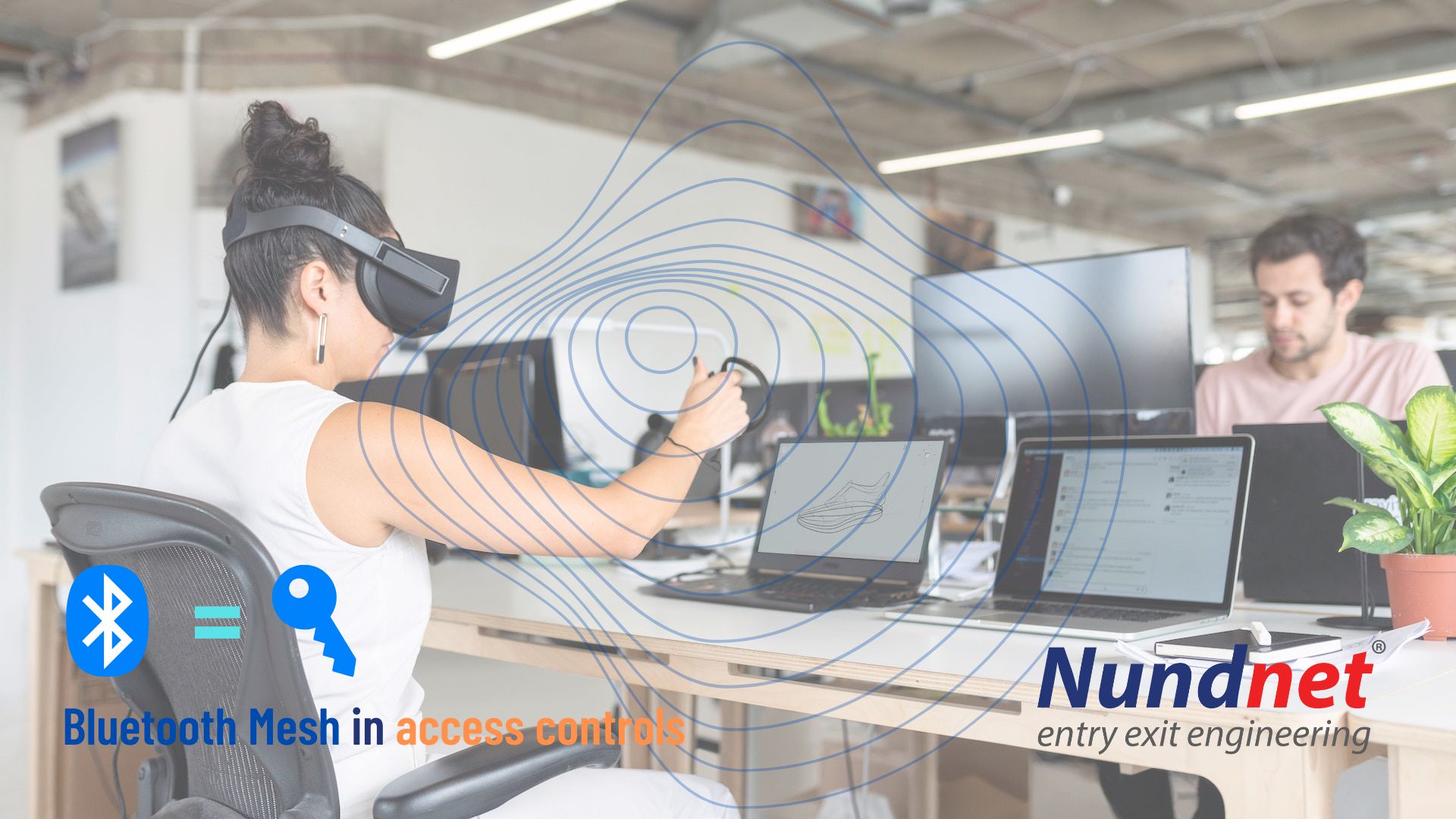 Bluetooth mesh access control systems, use mesh technology that is typically an ideal choice for a place where scalability for thousands of devices per network, reliability and high performance is the criteria. In general, the bluetooth mesh is a complete, full stack solution,  helps in communication among and along various devices and optimisation for the large scale networks. This mesh defines the layers exclusively from low level physical layer through high level application layer. Bluetooth mesh is entirely independent of any network and is inter-operable. Bluetooth mesh uses the principle of flooding network for communication, typically a mesh networking, where the network’s use the routing algorithms for every incoming packet and is sent through every outgoing link except the one it arrived on. Here each node acts as both a transmitter and a receiver or sometimes each node tries to forward every message to every one of its neighbors except the source node, this way the message is transported in a very efficient way. Bluetooth mesh is a layered architecture, consisting of six major layers and each layer has a very vital role. The basic six layers for the bluetooth mesh are described as

Model layer is a standard way to exchange application specific messages. For example, an access control using the BLE model of communication, Model defines an interoperable way to control the reader. Being the mandatory models also referred as the foundation Models, these define the states and messages needed to manage a bluetooth mesh network.

Access layer defines the mechanism to ensure that data is transmitted and received in the right context of a model and its all associated application keys. It controls the encryption and decryption of the application data in the upper transport layer.

This layer has a great importance in ensuring the security of the network. An upper transport layer defines authenticated encryption of access layer packets using an application (or device specific key e.g. mobile phone etc ). And it defines some control messages to manage friendship or to notify the behavior of nodes using the heartbeat messages. The heartbeat messages are transmitted by the nodes periodically as the transport control packets through the network, and are only encrypted with a network key to maintain the security layer.

Network layer defines functionalities including encryption, decryption, and authentication of the lower transport layer messages. The layer transmits the lower transport layer messages over the bearer layer and relays the mesh messages when the Relay feature is enabled. The network layer also defines the message cache containing all recently seen network messages. If the received message is found to be in the cache, then it is discarded.

This layer defines the procedure of exchange of  network packets between nodes. Mesh Profile specification defines BLE advert bearer (advertising & scanning to receive and transmit Bluetooth Mesh messages (GAP)) and BLE GATT bearer (allows a device which does not support the advertising bearer to be part of a Bluetooth Mesh Network via a proxy node). The Mesh Profile defines Proxy Protocol, through which mesh packets can be exchanged via other bearers like TCP/IP.

The bluetooth based access control systems are designed and developed by Nundlab, Inc. USA in accordance with international standards. From basic BLE readers to BLE connecting devices, we offer a wide range of product eco systems. Our bluetooth readers are available in a variety of designs, indoor & outdoor applications and we help in design and customisation of solutions based on client projects. Our bluetooth integrator makes every access control lock to be controlled by Mobile Application. The extraordinary design of bluetooth mesh and wireless gateway helps in solving many network issues. Nundnet® is trademark of Nundlab, Inc. USA. The manufacturer & supplier of world class turnstiles, access control systems and UHF long range readers across the globe.